This Rocky Mountain Holidays exclusive Vancouver to Calgary one way eastbound itinerary uses the mountain town of Banff as a base to explore Banff National Park.

This package includes the luxury of 2 days onboard the Rocky Mountaineer train in SilverLeaf or GoldLeaf service from Vancouver to Banff, and sightseeing by motorcoach from Banff. Included are two nights in a handpicked hotel in Banff. Disembarking the train in Banff, rather than Lake Louise, gives you additional time onboard to enjoy the scenery of Banff National Park, which includes Morant's Curve (pictured above). If you would like an overnight in Lake Louise and an overnight in Banff, instead of two nights in Banff, consider the 6 night First Passage to the West Highlights vacation with the Vancouver tour.

This itinerary is available in reverse, starting in Calgary on Sundays, Thursdays and some Mondays.

If you like this itinerary but would prefer to spend more time in Banff, consider the 7 night First Passage to the West Top Leisure vacation. This package includes four nights in Banff, instead of two, as well as an Icefields Parkway tour.

This itinerary does not include Jasper. If you would like to include Jasper, within a similar time frame, consider the 6 night Journey Through The Clouds Excursion vacation. This package includes the Rocky Mountaineer train to Jasper from Vancouver and sightseeing by motorcoach from Jasper to Calgary, with overnights in Jasper, Lake Louise and Banff.

Our quotes do not include (unless specified):

Note: For your convenience, our quoted rates include all tax.

Arrive in Vancouver and spend time exploring this scenic city on your own.
Overnight in Vancouver.

Explore Vancouver and enjoy your choice of one of four activities: a sightseeing tour of Vancouver’s spectacular North Shore, a guided bicycle tour of Vancouver’s highlights, a small-group culinary walking tour at Granville Island market, or a Sea Safari zodiac boat tour along the Howe Sound coast.
Overnight in Vancouver.

Travel onboard the Rocky Mountaineer from the coastal city of Vancouver to Kamloops, in the heart of British Columbia’s interior. On today’s journey you will see dramatic changes in scenery, from the lush green fields of the Fraser Valley, through forests and winding river canyons surrounded by the peaks of the Coast and Cascade Mountains, to the desert-like environment of the BC interior. Highlights include the rushing waters of Hell’s Gate in the Fraser Canyon and the steep slopes and rock sheds along the Thompson River. Your day concludes as the Rocky Mountaineer travels along the shores of Kamloops Lake into Kamloops.
Overnight in Kamloops. B, L.

Your journey continues eastward to the mighty Canadian Rockies and the province of Alberta. Once again you will see a spectacular array of scenery as you travel across ranchlands, along rocky lakeshores, over high mountain passes and through the remarkable tunnels that form part of the rich rail history of the Canadian Rockies. Today’s highlights include Craigellachie, where the last spike of the Canadian Pacific Railway was driven, the climb over Rogers Pass, Kicking Horse Canyon, the Spiral Tunnels and, of course, the glaciers and snow-capped peaks of the Canadian Rockies. Your rail journey ends this evening in the resort town of Banff.
Overnight in Banff. B, L.

A half-day tour takes you into Yoho National Park to view some of its natural wonders. Among the attractions are the Spiral Tunnels, Emerald Lake and a natural rock bridge spanning the Kicking Horse River. The tour ends in Lake Louise where the remainder of the afternoon is at your leisure to enjoy this magnificent location before returning to Banff in a motorcoach transfer.
Overnight in Banff

Begin the morning with a sightseeing tour of Banff. Among the points of interest are Bow Falls, Lake Minnewanka, Surprise Corner and the Hoodoos. The included Banff Gondola will take you up to Sulphur Mountain summit for breathtaking views of six stunning mountain ranges and spectacular views of the Bow Valley. Transfer to Calgary in the afternoon.
Overnight in Calgary.

Your journey ends upon checkout from your Calgary hotel.

This package starts in Vancouver on Saturdays, Wednesdays and some Sundays from late April through until early October.

Confirmed package rates for 2023 are now available. Contact us for more information.

Prices depend on the time of year you travel, the hotels you stay in and the level of service you choose onboard the Rocky Mountaineer train (SilverLeaf or GoldLeaf service).

Promotional bonus offers are added automatically to your quote from us (if applicable).

If you would like a full quote for this package, be sure to include the package name in your quote request. 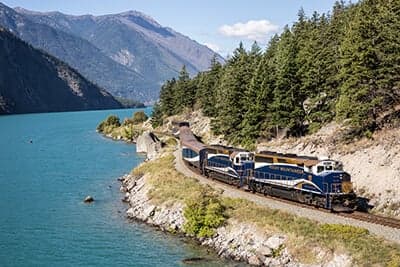